Evan describes her experiences with restaurants in Bardoli.

Since arriving in Bardoli, I’ve been fascinated with their impressions of other cultures.  When you walk around Bardoli, you find advertisements in English for things like a yoga studio, a sandwich shop whose name is some derivative of the word “Panini”, Subway (yep the same sub shop as in the U.S.), and other things that just strike me as odd. I wonder whom these advertisements are intended for because they seem ill suited for Indian consumers, at least in the view of someone with a limited knowledge and experience of India. It’s perplexing but altogether intriguing.

We’ve eaten a few meals out in Bardoli, and at restaurants that offer cuisines other than Indian, I’ve been very amused, and curiosity getting the best of me, I have of course had to order these other cuisines. We ate dinner at a family restaurant one day last week, and upon seeing a section of the menu designated “Lebanese,” I knew I had to order something from that section. In undergrad, I worked at a Middle Eastern and Mediterranean restaurant that was owned and staffed by individuals from Syria and Lebanon. I was just dying to see how this cuisine would translate in Indian culture. I ordered hummus figuring that it was probably a pretty safe option, and I was pleasantly surprised at how good and how generally authentic it was. The bread that they called pita bread was definitely not up to par, but overall I thought the meal was a cultural success for India.

This past Saturday, Sarah, Tom, and I decided to stop for lunch at the Wednesday Café after exploring Bardoli a bit. Once again, the menu had unusual cuisine offerings that were just too tempting to pass up. I settled on a “Maxican” (hint: Mexican) dish that intrigued me and ordered their “creamy nachos.” The dish was basically corn tortilla chips with melted cheese on them served with a side of a spicy, salsa-esque sauce and a cheese like sauce with some Indian spices incorporated as well. Once again, I was pleasantly surprised by how tasty the dish was and also by how there was some authenticity to it.

I am still curious as to who these different cuisines are supposed to cater to because Bardoli doesn’t seem to get much tourism from the West. I also can’t imagine many Indians in Bardoli ordering these dishes, but perhaps my assumption is wrong. I plan to continue my culinary tour of Bardoli for the remainder of my stay, but I guess this is one Indian mystery that will have to be solved another day. 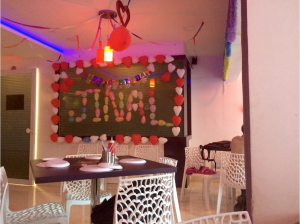 (Here’s a picture from the Wednesday café where I ordered the “Maxican creamy nachos.” Apparently, we were either too early or too late to partake in Jinal’s birthday festivities.)