Thomas writes about the animals, large and small, that coexist with Bardoli street life. 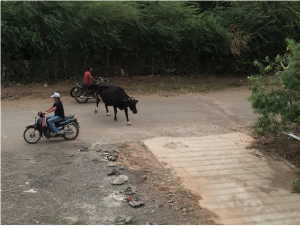 One of the most fascinating parts of India to me is the amount of animals that coexist with the people in everyday life.  Walking back and forth from work my attention isn’t on avoiding tripping on rocks, not getting hit by motorbikes or being ready to whip out my umbrella if the monsoon starts to descend; is usually focused on not stepping in cow manure, water buffalo manure, or pig manure. Now, if we were living out in a village surrounded by grass and trees maybe these things wouldn’t be so fascinating. Bardoli is a nice sized city, however, and when you walk out your door you are usually faced with buildings and pavement.

The most obvious of the animals who live in Bardoli are the cows.  Of course, cows and India are two things that all Americans generally know go together, but it’s one thing to know that cows are important in Hinduism and another to have your commute to work be held up because you have to wait for the herders to finish bringing their cows across the road or see two cows get into a fight over food.  The cows in Bardoli don’t look like the cows Americans see on milk and cheese commercials but have a large hump on the front portion of their back, and their horns are allowed to grow. (Although now that I’ve seen two cows fighting in the street, I have some sense as to why American farmers prefer not to let those horns to grow.)

Water buffalo are also common in Bardoli.  These big black beasts are easily discernible from the cows because their horns swoop down to the sides, instead of growing upwards like the cows’ horns.  While they’re called water buffalo, there is very little water in Bardoli in regards to lakes and rivers, so apparently large bodies of water aren’t necessary for their upkeep. In fact, it’s said to be good luck to see a water buffalo actually spending time in water.

After the cows and water buffalo, the pigs are the most exotic animals trotting around Bardoli.  Since being here, I’ve rarely seen the pigs actually walking along the streets.  They seem to stay down in the little valleys where small streams of water flow, possibly for sewage reasons but I’m not certain.  I don’t know if they like those valleys because it’s away from the people and road or because of the garbage that tends to collect there.  But if you pass by one, there is a good chance you will be able to see at least one pig and sometimes piglets, walking along sticking their nose in every piece of garbage trying to find something to eat.

Of all the animals here, it’s the street dogs who seem to have the run of the town.  I’m always amazed when a street dog decides that the middle of a road is the best place to take a nap and the oncoming vehicles graciously just drive around them.  Besides the street dogs, you will sometimes see people who have dogs as pets.  Usually they are little white fluffballs, but sometimes you see people with larger breeds.  These dogs seem to assimilate easily into their humans’ lives, whether it’s going on a ride on the back of a motorbike or taking up three quarters of the family’s front porch swing.

The animals and people do seem to get along well though.  I often see people throwing their unwanted scraps of food to passing cows or dogs, and the only rule of thumb for driving in Bardoli that I’ve yet to discern is that animals have the right of way.  All in all, it’s pretty fun to walk out of your building to see cows, buffalo, pigs, and dogs.  Although, I could do without the manure.