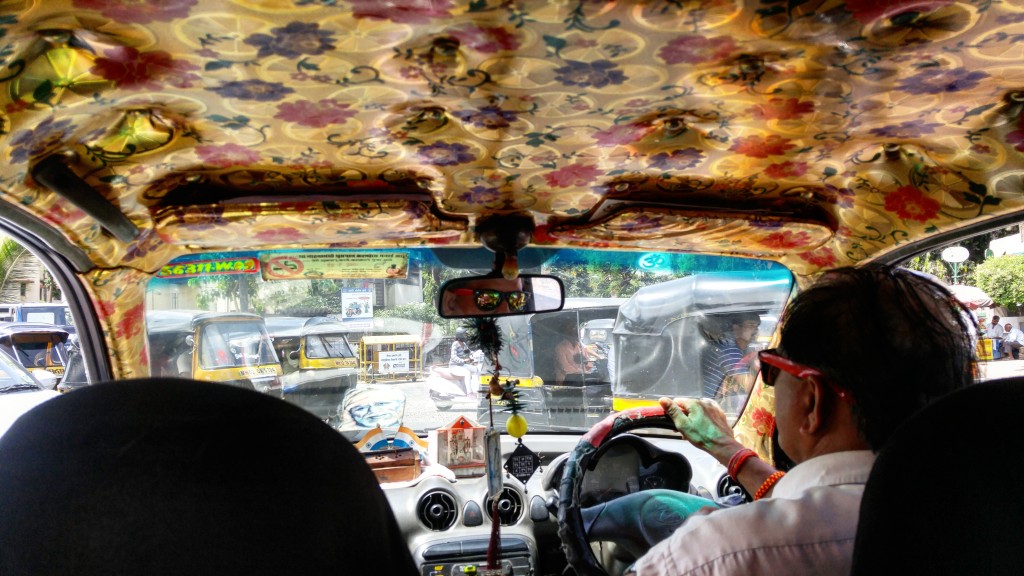 Mumbai, India: A confident taxi driver driving us from our hotel to the train station. A first impression of Mumbai from this taxi ride: colorful!

Exactly a week ago, I was wiping sweat off my brow as I struggled to move out of my freshman dorm at the University of Vermont. I remember thinking wow, I haven’t sweat from just daytime heat in like, nine months! How sweet the summer weather is! Classic Vermonter.

I neglected to think about the fact that one week later – that is, today – I’d be settling into my new home for the summer in Bardoli, India, where a current heat wave has been getting international attention for its severity. Right now, I’m trying not to think about it! I find that the heavy heat is more bearable if you ignore it. Massive volumes of sweat aside, I’m delighted to be here.

The over-thinker in me tells me I have lots to think about. En route from Mumbai to Bardoli, I saw a lot of striking scenes… striking to me, anyhow. What I’ve seen of India is very different than my home in Vermont. Here, there is lots of litter around: plastic bottles, discarded wrappers, and a surprising amount of single plastic sandals make up the most of what I noticed. There are homes of all sorts of shapes and sizes in places I didn’t expect to see a home. Tarps and ropes and sticks and rocks have been arranged into shelters along the railroad tracks and on the sides of busy roads. Humans are everywhere and their movement is graceful and chaotic. It seems that rules of the road – like which direction to drive in and what constitutes a road – are just casual suggestions that the bustling mass of drivers obey only sometimes.

What’s stuck me the most, though, is the unceremonious kindness of everybody we encountered. Hailing from rural Vermont, I’ve always been skeptical of busy city folk, though now I wish I had had more faith. In Mumbai, a string of unrelated strangers gently guided Emma and I from the airport in Mumbai to the train station in Surat by appearing just when we started to feel like we needed it. Most notably, a young mother who sat across from us on the train got off at the same stop as us and did so efficiently, despite her many bags and children. When she saw that we did not get off after her, she came back to the door and helped Emma and I squeeze our way through the stifling crowd of pushy people trying to get on as we tried to get off. Without her, I wonder if we would have gotten off the train at all.

The adaptive traveler in me tells me not to think so much –  just to experience and to learn from it. Maybe that seems silly, but I have a feeling this will work better, at least as I’m still settling into life in Bardoli. So far, all of my predictions and expectations have been wrong: I underestimated the heat and I overestimated the hostility of cityfolk and strangers. I’m thinking that for the next three months, I’ll leave my estimations at the door with my sandals.