Summertime in Gujarat means high temperatures and high quantities of mangoes. After a short bout of heat sickness, Giannina recovered with the help of the best-tasting medicine she’s ever had.

“Today is Mango Day,” said Mitesh, as he presented to us a heaping platter of freshly cut mangoes from his own trees. “More mangoes?!” we exclaimed, as we licked desi mango juice off our fingers. Really, if we wanted, every day could be Mango Day because it’s summertime in Bardoli and mangoes are plentiful and famously delicious. And we probably already cut up at least one mango daily… So although today’s mangoes were a special treat, it had nothing to do with the mangoes. It had everything to do with the people eating them.

It’s Friday, and the end of our first super-busy week. Nearly 70 candidates came to the office to interview for a Nanubhai scholarship over the past three days, and as tired as we interns were, we could see that Jayesh and Mitesh were even more so. Since we don’t speak Gujarati, our tasks are limited, and everything else falls on Mitesh and Jayesh and ex-Principal Mahida Sir (one of NEF’s founders who helps interview applicants). So today we started the day later than usual, and when Mitesh showed up he came carrying a big cloth bag full of mangoes from his trees at home.

About half of them were desi mangoes, which are smaller and apparently of little worth. “If ever you see desi mango on a tree, you can take it and eat it. Nobody cares if you take their desi mangoes, because they’re just desi mangoes,” Jayesh told us, half-jokingly. They taste a little different, and they’re harder to eat. In fact, you don’t really eat them – you suck them! First you poke and squish the mango with your fingers until it’s mushy to the touch. Essentially, you’re creating a pulpy juice underneath the skin. Then you cut off the little button stem and squeeze until a little juice comes out. Then you proceed to suck the juice out, much like I imagine a hungry spider would devour the insides of an especially chubby fly.

The other half of Mitesh’s mangoes were of the keshar variety, and look very much like what most Americans would consider all mangoes to look like. (Having lived in Bardoli for nearly a month, I like to consider myself a mango connoisseur.) These he cut up and piled onto a silver stainless-steel platter, and the glistening slices looked almost too good to eat with their energetic, polluted-sky-at-sunset-esque color.

You see, last night I had a bout of heat sickness that left me pale, nauseous and clammy. I think I was also slightly feverish because I felt way hotter than normal and my dreams were super weird. I woke up this morning feeling much better but still with a headache and general grogginess. So the slow-going day was well received by my slow-going brain… but little did I know, mangoes were to the rescue!

The mangoes were delightful, and the five of us gobbled them up like happy children. We dubbed ourselves “Team Mango Party” and relished in the joy of the sweet, summertime fruit. Before long, only limp mango skins were left on the platter, and our fingers and lips were sticky with mango juice. As I leaned back and folded my hands over my belly, satisfyingly filled with mango-meat and residual laughter, I realized my head no longer hurt and by body no longer ached! They say laughter is the best medicine – and although I agree, I must say that if you add mangoes into the equation, it’s infallible. 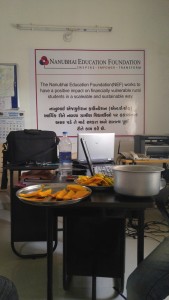