Learn more about one of our 2015 interns, Sonia, and her personal connections to the goals of Nanubhai. 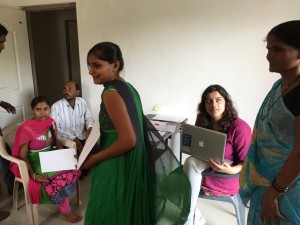 In the northeastern part of this country, there is a tiny state called Meghalaya where the society is

structured around the roots and traditions of matriarchy. Once married, men reside in the house of their

mother-in-law, instead of the son inheriting the family heirlooms and wealth, the youngest daughter

does and children usually take their mother’s surname instead of their fathers. For a minute, let’s move

women. The Gulaabi Gang was founded by Mrs. Sampat Lal in 2006 in a district enveloped which thrived

on domestic violence, female illiteracy and patriarchy. The group was founded to combat the violence

and provide women with opportunities. Most of the members of the Gulaabi Gang wore pink sarees and

carried around long wooden sticks to protect themselves. From the north, we slowly visit our home

state of Gujarat. The SEWA movement was initiated by Mrs. Elaben Bhatt of Ahmedabad and the

themselves and thrived on in this country. Beneath the pseudo-feminist version of “Indian women are

always oppressed” lies a prosperous society controlled and led by women. A society I grew up in.

I consider myself American but I grew up in India. Bombay has been my home for as long as I can

more than I can ever imagine. Yet, I thought that there was something missing in my book of

visit. Gujarat. Yes, that’s right, I am Gujarati, I speak, read and write Gujarati but I never took any

particular pride in the cultural and religious aspects and traditions. In my eyes, I am Indian. Still, when I

lives, I was fascinated and I knew that I wanted to, and I could contribute. In big cities like Bombay and

Delhi, most girls can attend college for free, simply because of their gender. I realized that such

opportunities did not really exist in the recent developments which Gujarat went through. I dropped my

Bardoli, where the organization is located reminds me of Cairo, with the cows and the buffaloes on the

road. It is very similar and still very different. The view of our terrace looks similar to the border city of

Amritsar. The chai shops on the road remind me of a desert highway in Amman, Jordan. Bardoli feels

like a microcosm of many other places I have lived in and known. Gujarat is not a place I want to fall in

love with or make my home; I rather make it a symbol of hope. So much hope. I feel that rush of

with their education. Deep down, I knew I could have been in their place if my family had never left this

state for good. I could have been the one applying for a scholarship. I take pride in the fact that so many

Gujarati women are stepping up to build a foundation of courage and expectation. I don’t know what