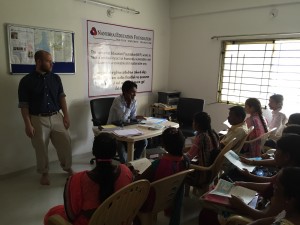 One of our interns, Thomas, explains the stages of Indian education.

Speaking to an Indian about their experience going through school makes it clear that there are some differences between the American and Indian systems of education.  The main reason for this, unsurprisingly, is that the Indian educational system is based on the British model, which has left a lasting effect on the Indian educational system.  For instance, while we speak about principals, they speak about headmasters.  Another effect on the educational system leftover from the British is the notion of education as a type of ‘gatekeeper’ to entering lucrative government positions.  Fortunately, the Indian constitution counters this notion by stating that education must be free and compulsory for students between the ages of six and fourteen. India has made great strides in giving students access to education, although it still hasn’t reached its goal of 100% enrollment and completion. (Cheny et al., 2005).

The Indian education system is broken up into four different stages.  The first is primary school.  This stage starts in first grade and ends in fifth grade, and students are typically between the ages of six and ten. At this period in their education, the students are taught in their mother tongue or regional language, unless they are enrolled in a school where the language of instruction is specified differently. There they are taught the basics of reading, writing, math and science (Cheny et al, 2005).

The middle stage starts in the sixth grade and ends in the eighth grade.  Students are typically around eleven to fourteen years old.  In this stage the students add two new languages to their studies, typically Hindi and English in Gujarat. This is in accordance with the national government’s three language policy, which seeks to give Indian students a foundation in their own language, the national language, and English (Cheny et al, 2005).

Secondary school takes up grades nine to twelve, ages fourteen to seventeen.  This stage marks the biggest difference from the American education experience because during their secondary years, students take two different exams that will determine how their education will progress.  The first test is taken at the end of tenth grade.  This test will determine what ‘track’ the students will follow in eleventh and twelfth grades.  The most prestigious track and the one requiring the highest scores is the science track.  The other two tracks that can be followed are commerce and humanities.  The second exam is taken at the end of twelfth grade and will determine where the students can go to university (Cheny et al, 2005).

Cheney, G. R., Ruzzi, B. B., & Muralidharan, K. (2005). A profile of the Indian education system. Prepared for the New Commission on the Skills of the American Workforce.