Evan compares and contrasts the areas she has visited so far.

While Bardoli is a nice place to live, it is not quite what I expected of rural

India. It is more developed than I expected, there are quite a lot of stores and

restaurants, both men and women wear a fair amount of Western clothing, and I

have even seen what appeared to be a white limousine driving around. There also is

not a lot of greenery in the sense of green space and parks, and there is a ton of

construction going on all over the town, too. For the most part, what I’ve seen of

On Sunday July 5th, Sarah, Tom, Sonia, and I made our first trip outside of

Bardoli to Kadod and the village of Kosadi. The bus ride to Kadod was pleasant and

all the farmland, picturesque greenery, and nature that we passed by on the way

was like a breath of fresh air. In comparison to Bardoli, Kadod seemed small and

quaint, most places you would need to go were within easy walking distance. After

interviewing one of the 2015 scholars, we headed to Kosadi, which is a much

smaller village. Almost immediately, we stumbled upon these photogenic cuties. 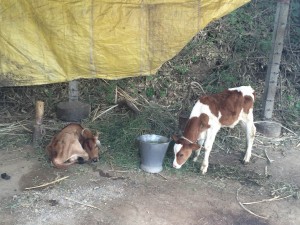 After ooh-ing and ah-ing over their adorableness, we carried on with our task of interviewing the two NEF

Scholars who live in Kosadi, Devi and Jashmila. We were dropped off at a central location in the village where

Devi met us and walked us back to her house. As we walked through the village looking like a funny sort of

procession, village residents and children kept asking Devi what was going on. She

told them, and we carried on. I am sure we seemed to be quite the spectacle though

to them. We got to see Devi’s house and the house of the other NEF Scholar Jashmila

who lived right next door. Both of their houses were traditional houses made of

mud, which I really enjoyed seeing because I had never seen one before in person.

After we finished Devi and Jashmila’s interviews, they showed us the Tapi

River that was located down a steep hill behind their house. The view was quite

lovely, and I have to say was more of what I imagined India to look like, utterly

charming. Thus far, traveling to the villages and getting to see the girls in their

homes has been my favorite aspect of the intern experience. It is more of what I

imagined the heart of India to be like. I’m excited to continue traveling and visiting

scholars at their homes and can’t wait to see more of beautiful India!