Curious about some common forms of transportation in India? Read about Evan’s bus and motorbike adventure! 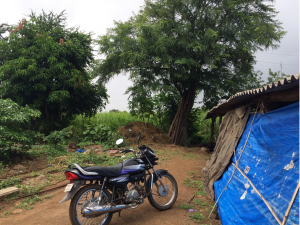 One of our means of transportation for the day.

On Wednesday, July 8, Sarah and I traveled to Vyara to interview 4 NEF Scholars who live in nearby villages. I had experienced the bus here once before but not quite like this. When Sarah and I got on the bus, there were only two empty seats left on the entire bus. I found myself wedged in between a nice lady and a boy who looked a little younger than me in the very back of the bus, and Sarah convinced a guy to move his bag so she could sit in the seat next to him. Everyone who got on the bus after us had to stand, and I was so grateful to have a seat because I think the driving style of Indian bus drivers would have really put my balance to the test. Even with a seat though, my expressions when we hit some really rough areas of road and when I literally bounced out of my seat cracked up many of the travelers around me who were clearly much more experienced in the ways of Indian buses.

When we got to Vyara, Mitesh and his cousin met us on two motorbikes, and we head off to the villages. Riding on the back of a motorbike in the town made me a little nervous because it just feels so wrong to drive on the left side of the road and also because the Indian style of driving in crowded areas is absurdly chaotic. Once we got out into the countryside though, the ride was incredible. The sun beaming down on you, the wind in your hair, and gorgeous views of Indian countryside for as far as the eye can see. What could possibly ruin such a great experience? One word. Rain.

On our way to the first two villages, we had to pull over to the side of the road a few times and seek shelter under the trees because the rain was coming down so hard that you really couldn’t see anything. When the rain let up some, we hit the road again.  Despite the rain (and getting lost a few times also), I still thoroughly enjoyed traveling on the motorbike, and personally, I’m convinced that one of the best ways to see a country is on the back of a motorbike.