Evan shares her encouraging thoughts about helping to provide desperately needed educational opportunity to girls Rajasthan. This was written over the summer, while she was interning with Nanubhai in India. 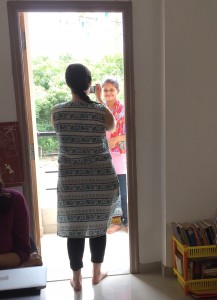 Earlier this week, Jayesh and I took a trip to Rajasthan to launch a pilot project. Through the pilot project, Nanubhai is giving scholarships for one year of college to 4 girls in the state of Rajasthan. The hopes for the pilot project is that it will go well, and hopefully, Nanubhai will be able to continue to fund these 4 girls’ college educations and further expand into Rajasthan in the future.  While much of the trip didn’t going according to plan due to circumstances beyond our control and this little thing called a monsoon, we were still able to accomplish all of our tasks, and I really enjoyed the experience.

Jayesh and I arrived at the Bardoli bus station and hopped on a bus headed for Surat. Normally, the bus ride to Surat takes about an hour, but for some reason, the trip took 30 minutes longer than usual. The bus took a different route, so my best guess is that the combined forces of the monsoon and traffic caused our delay. Racing to beat the clock, we got off the bus in Surat and rushed to the train station, making it with ten minutes to spare. The plan was to take our overnight sleeper train to Udaipur, check into our hotel, and then take a two hour bus ride to the village in Rajasthan where the Nanubhai Scholars would be waiting to meet us. While our train did leave on time, it didn’t arrive in Udaipur until almost two hours later than scheduled. The monsoon was once again showing that it was a force to be reckoned with.

After arriving in Udaipur, we checked into our hotel, freshened up, had a snack, and headed to the bus station, and all the while it was raining incessantly. We arrived in the village two hours later than planned and took a rickshaw to the site of the reception. When we finally arrived both late and a little wet, everyone was so welcoming and glad to see us. I was impressed by their hospitality and also by how big of a crowd there was for only four Nanubhai Scholars. Later on, we would find out that only two of the girls were accompanied by their parents, and the rest of the individuals there were from the community or the NGO that worked in the village. When looking at this crowd of nearly twenty people gathered for these four Nanubhai Scholars receiving college scholarships, the phrase “it takes a village” came to mind. My heart was warmed by seeing so much support for our Nanubhai Scholars.

The individuals who worked for the NGO talked about how important education was for Rajasthan. They spoke of how the level of education for women in Rajasthan isn’t very good. A lot of girls end up dropping out of high school between 10th and 12th standards because college is not a likely option for them. If they can read, write, and do basic math, graduating high school doesn’t seem very important in the big picture if the possibility of college is nonexistent. They were hopeful that Nanubhai’s scholarships would help change that perception, encourage more girls to stay in school, and ultimately inspire a ripple effect in their village. After meeting the Nanubhai Scholars and all of the individuals who were there and encouraging them to pursue a college education, I couldn’t help but feel hopeful too.